The Bratrství repository is located near the town of Jáchymov in the foothills of the Krušné (Ore) Mountains and is situated in part of the former uranium mine of the same name. The repository has been in operation since 1974 and is intended exclusively for the disposal of waste arising in the health, industry and research sectors containing naturally-occurring radionuclides.

Since the repository is located in a former uranium mine, the environment and the local water flow will always contain a certain level of radionuclides, irrespective of the disposed of waste. The locally present radionuclides originate from the natural transformation of uranium and thorium, which is taken into account in the evaluation of the monitoring results.

The first mention of mining in the Jáchymov area dates back to 1516 when the town was founded. The Bratrství mine makes up one of several former silver mines in the area. Silver and heavy metals were extracted for several centuries, but it wasn’t until the discovery of radioactivity at the end of the 19th century, that the mines attracted attention due to the high volume of uranium ore. After 4 years of research at the Bratrství site, Marie Curie-Skłodowska discovered the elements polonium and, subsequently, radium. The first gram of radium was isolated by Curie-Skłodowska from Jáchymov pitchblende. In the 1930s, a radiological water spa was founded in Jáchymov that continues to function up to the present day. The industrial mining of uranium under notoriously bad conditions, especially for prisoners convicted of political crimes in the 1950s, commenced following the end of the Second World War. The high-quality uranium ore extracted was exported free of charge to the Soviet Union. By 1964, when uranium ore mining in Jáchymov was terminated, around 7,200 tons of uranium had been exported to the USSR. Ten years later, part of the Bratrství mine was adapted for use as a radioactive waste repository.

The total volume of the usable space of the Bratrství repository is around 1200 m3 and the disposal capacity has almost been exhausted. The graph illustrates the amounts of waste disposed of in individual years since the repository was transferred to SÚRAO management. 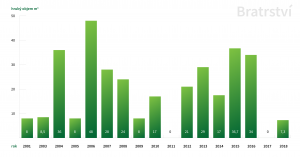 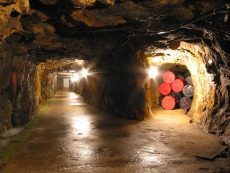 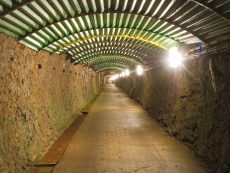