Life stages of the DGR

The deep geological repository (DGR) will be used for the safe disposal of all the radioactive waste generated in the Czech Republic that is unsuitable for disposal in surface and near-surface repositories. The repository system will be based on a set of geological and engineered barriers that will complement each other. The most important barrier will consist of the 500 metres of stable rock above the repository. The commencement of operation of the DGR is expected in 2065.

Phase 1: Preparation of the DGR 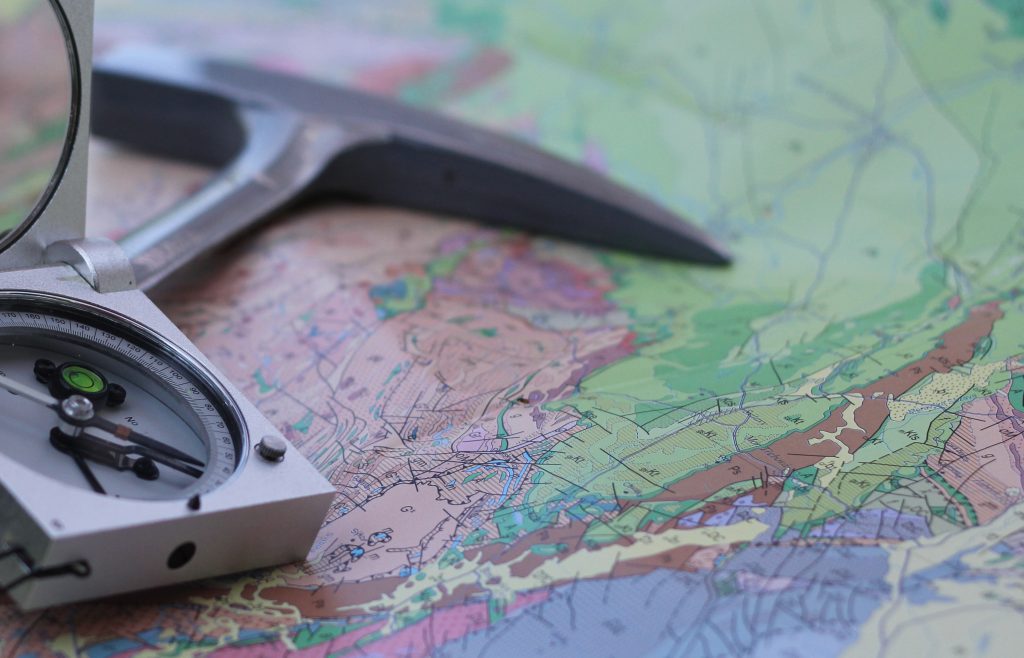 The DGR preparation stage concerns the research of a number of pre-defined candidate sites, which includes a range of important activities, the most visible of which relate to geological research work, the planning of the surface area layout and monitoring.

The aim of the geological research work is to provide an accurate description of the sites and to assess in as much detail as possible the conditions of the rock mass within which the repository will be constructed. This is only possible through targeted geological work involving the drilling of boreholes and the taking of detailed geophysical measurements. Geological research work is conducted in the form of geological research and exploration campaigns and according to specific geological tasks. The financial contributions awarded to the affected municipalities are linked to the establishment of so-called exploration areas. Larger-scale geological research work will commence following the introduction of the Act on the Involvement of Municipalities or after 2023 (whichever comes first). SÚRAO will focus primarily on research that will be aimed particularly at obtaining data for the compilation of safety reports and models, and will be conducted over an area of up to 25 kilometres from the candidate DGR site. SÚRAO must demonstrate to the regulatory authorities that, from the safety point of view, the changes and processes that are underway in the rock environment, hydrosphere and atmosphere (climatic changes) will not exert any negative impacts on the deep repository and, thus, that the facility will not endanger either human health or the environment (biosphere). For example, data on the properties of the rocks and the nature of identified rock interfaces will be obtained so as to enable experts to study their age, the fillings of fractures and the degree of activity in the past. In the event of the necessity to conduct research at the sites, SÚRAO will communicate with the owners of the land to which the work relates, request entry and fully inform them of the planned activities. The outcome of the detailed exploration and research work will consist of the determination of the final and backup sites for the construction of the DGR.

Immediately following the reduction in the number of candidate sites, SÚRAO will conduct only essential preparatory and monitoring work (for example, the monitoring of water, climatic conditions and radon). In the next phase, however, SÚRAO plans to monitor all the components of the environment. One of the priorities will, of course, be water; experts will examine surface water flows, groundwater conditions and local precipitation. Newly-built monitoring stations (e.g. sluices and boreholes) and, with the consent of the owners, existing wells will be used for monitoring purposes. Local inhabitants will, thus, be able to regularly check, for example, the condition of their wells and the quality of the local groundwater. In order to provide for the monitoring of seismicity at the sites, SÚRAO plans to supplement the Czech regional seismic monitoring network with several of its own stations. Moreover, SÚRAO will also focus on the occurrence of radon in the soil and water.  Should it receive the necessary permission and should the inhabitants be interested, SÚRAO will also test for the presence of radon in people’s homes and, naturally, share the results with local citizens.

Project design of the surface and underground areas and operational safety

The disposal and safety concepts will be developed as part of the preparation phase of the deep geological repository. The optimal location of the surface areas of the DGR at the candidate sites will be selected based on the dimensions of the homogeneous rock block that will host the underground complex. The project design must respect the specific aspects of the site in conformity with the environmental impact assessment process. Furthermore, since the DGR will be classed as a nuclear facility, it will be necessary to prove its operational safety, i.e. the safety of the transportation of radioactive materials from nuclear power plants to the repository and all the procedures involved in the disposal of such materials during the operational phase of the facility.

All the data obtained from the above-mentioned activities will be further assessed via safety reports submitted to the relevant regulatory and supervisory bodies (e.g. the State Office for Nuclear Safety – SÚJB). Work commenced on ensuring the maximum safety of the repository project as early as at the start of the deep geological repository preparation phase. This involved ensuring that the combination of natural and artificially-created (engineered) barriers and the disposal system as a whole meet all the requirements arising from the relevant safety requirements (SÚJB).

Dialogue with the public concerned

In this respect, the most important activity will concern the establishment of local working groups, in which representatives of local municipalities will play a major role. These groups, which will also include SÚRAO experts and, possibly, representatives of other state administration and local government authorities, will address those technical aspects of the project that may directly concern the affected municipalities, including, for example, the planning of geological survey and research work, the location and layout of the surface area and the monitoring of the local environment. One of the most important tasks of such local working groups will be to address the issue of the location and appearance of the surface facility. The aim will be to determine a solution that will affect the current character of the landscape as little as possible and that will, as far as is practicable, meet the requirements of the affected municipalities.

Phase 2: Construction of the DGR 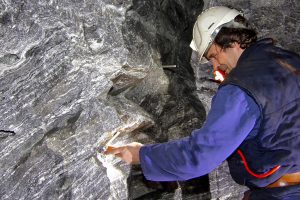 The construction of this facility will commence following the selection of the final site. It will be located in a homogeneous rock block. It will be a research/exploratory facility that will serve for the confirmation of the basic assumptions concerning the behaviour and properties of the specific rock mass. Under real geological conditions, experts will examine, for example, the actual state of the rock at the depth anticipated for the DGR, and the engineered barrier system which will make up one of the essential safety features of the repository. These barriers will consist of the disposal container, a bentonite sealing material surrounding the container and bentonite/concrete backfill layers. The research at the laboratory will continue for several years. Subsequently, once a licence has been obtained for the siting of a  nuclear facility, the construction will commence of the underground complex of the DGR.

Deep geological repositories are currently considered to be the safest solution to the permanent isolation of spent nuclear fuel and high-level waste from the environment. The safety of such facilities is based on an ingenious system of natural and engineered barriers. The Czech repository will be constructed after the conclusion of the work of the confirmation laboratory in such a way that it is gradually expanded to form the underground complex. A section will then be excavated for the disposal of other (non-spent nuclear fuel) radioactive waste and the various technical facilities will be constructed. Finally, the spent nuclear fuel disposal sections will be excavated.

The surface area of the repository will serve mainly for the various service facilities necessary so as to ensure the safe disposal of the radioactive waste, e.g. excavation, the preparation of the waste and the bentonite sealing material, storage, employee facilities, administrative buildings and the equipment necessary for the management of the excavated material. The surface area will be built together with the underground facility. The extent of the surface area will depend on the specific conditions of the finally selected site. According to preliminary studies, it will cover a maximum of 20 ha.

Transport, use of the excavated material, reduction of impacts on the environment

The extracted material will be disposed of via a system of landfills and intermediate landfills; the latter will be established in the area of the DGR and will serve for the short-term storage of the extracted rock. A suitable site near to the DGR complex will be determined for the long-term storage/disposal of such materials. Due to the expected high quality of the extracted rock, it can be assumed that it will also be possible to use at least some of it for the building of, for example, transport infrastructure in the wider repository region.
Transport to and from the complex will be provided both by roads (for the construction and servicing of the complex) and by rail (for the transport of radioactive waste to the repository). Rail is currently considered to be the safest and most environmentally friendly mode of transport. Naturally, the construction phase of the DGR, as with other large-scale construction projects, will have an impact on the surroundings of the facility. However, the mining work, the removal of excavated material and other work will be planned so that they exert the minimum amount of interference on the normal functioning of local municipalities.

Phase 3: Operation of the DGR

The operation of the deep geological repository will proceed in several stages.

Waste from existing nuclear power plants as well as (in the future) potential new nuclear sources will be disposed of at the DGR, as will high- and intermediate-level waste from nuclear generators in the Czech Republic other than those located at nuclear power plants. At the same time, new disposal sections will be excavated on a continuous basis depending on the amount of waste that will need to be safely disposed of in a given period. The operation of the repository is estimated at around 100 years.

Phase 4: Closure of the DGR

The repository closure process will commence before the end of the operational phase. The already-filled parts of the repository will be permanently and safely separated from those parts still in operation.

Gradually, all the disposal sections will be closed employing a special system of plugs and backfill material, primarily bentonite and/or aggregates. The loading corridors, technical facilities, access tunnels, etc. will then be sealed in a similar way. The surface area will be gradually dismantled and the land returned to its original state, i.e. the end of the process will result in the re-establishment of a “green meadow” landscape.

The DGR complex will continue to function passively for hundreds of thousands of years without human presence. Nevertheless, it is assumed that the wider DGR area will be continuously monitored for several hundred years following closure.

What happens next?
Scientists are already deciding about whether to mark the presence of the repository in some way following its closure and the completion of the monitoring process for future generations over the next several thousand years. Should the presence of the repository be marked at all? And how? Might the presence of e.g. an inscription or pictogram awaken the curiosity of our descendants that tempts them to take a look underground? Will such labelling still be understandable so far into the future? This issue and others will, clearly, require close attention.

Complete text can be dowloaded here.